An Interview With Byron Katie

~ Worth reading! … from off the web

Omega: Your experience of “waking up to reality” was very dramatic. Such experiences won’t happen to most people, so how can the rest of us awaken? 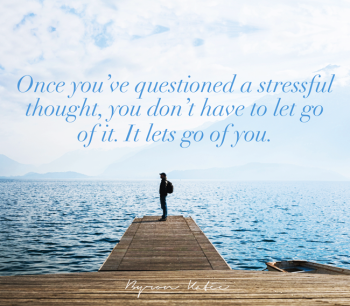 People think that they need to get “enlightened” in order to be free, and nobody knows what enlightenment is. Yes, it’s in the sacred texts, and yes, this guru or that lama says he has attained it, but that’s just a concept; it’s the story of a past.

The truth is that there’s no such thing as enlightenment. No one is permanently enlightened; that would be the story of a future.

There’s only enlightenment in the moment. Do you believe a stressful thought? Then you’re confused. Do you realize that the thought isn’t true? Then you’re enlightened to it. It’s as simple as that.

And then the next thought comes, and maybe you’re enlightened to it as well, and maybe not.

Omega: Most of our actions seem to arise out of thoughts and beliefs, even ones we perceive as altruistic, like caring for others or ending injustice. Where does the impulse to act come from once thoughts like “it’s not right to treat people like that” are dismantled?

Katie: I’ve heard people say that they cling to their painful thoughts because they’re afraid that without them they wouldn’t be activists for peace. “If I felt completely peaceful,” they say, “why would I bother taking action at all?”

My answer is “Because that’s what love does.” To think that we need sadness or outrage to motivate us to do what’s right is insane. As if the clearer and happier you get, the less kind you become. As if when someone finds freedom, she just sits around all day with drool running down her chin.

My experience is the opposite. Love is action. It’s clear, it’s kind, it’s effortless, and it’s irresistible.

Omega: What is your opinion on the state of the world today? What do you feel we can do about it?

I love the world, because I love the mind that created the world. I see the goodness and beauty in everyone, and everything is a gift given for me and for all of us.

If you don’t love it, question your mind until you do. That’s the best thing you can do for world peace. Create peace in your world, and then the rest of the world will follow.

Omega: What do you believe in?

Katie: I believe in the power of every human being to end suffering.

Omega: Can you describe the freedom that comes from not believing anything?

Katie: No. When I first woke up to reality in 1986, I felt that if my joy were told, it would blow the roof off the whole planet. I still feel that way.

Omega: What has life taught you?

Katie: To question everything, to remain open-hearted, and to serve the freedom of others as though it were my own. Because it is.

Omega: Do you have a daily practice?

Katie: To love without exception.

What do you think? Does Byron Katie’s simple wisdom appeal to you?

One thought on “Loving Without Exception”