First, he groped women because “as a celebrity, we can do whatever we want” . He admitted he lusted for his own daughter.

He made international deals that have padded his and his friends $$ pockets, while destroying our world wide reputation. He has used our military to aid the Russian president in destroying neighboring countries in a massively egocentric desire to recreate the USSR.

He has sold off sacred native lands for oil.

He has incited racists, homophobes, womanizers, and mass shootings.

In 2020, he ignored the warnings of the covid–19 pandemic, plummeting our country into crisis with more per capita deaths than anywhere else on the entire planet.

And now he wants the uninsured working class to get back to work, despite the risks. Because economic growth is more important than lives.

When American’s witnessed the murder of George Floyd, we became sick with grief and were outraged.

His solution? He wants all departments of the armed military forces to squash the protesters who are sick of police brutality, especially against the blacks. He had these forces use rubber bullets and tear gas so he could cross the street for a photo op. 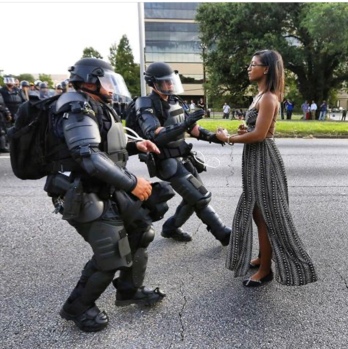 Are we going towards a fascist regime? The END of America? A policed country? My own husband believes that the country will finally crash and become a Dictatorship.

I’m proud of our protesters who risk their lives to say we are not going to be quiet anymore. And if you think our country is going to be intimidated by more police brutality, think again.

The response to clear racial profiling by our police forces has been intense, I know. But as my son observed:

“This is what the END of the Rope looks like.”

I know I simply can not stay silent knowing that we are in a real crisis— and it has to end.

November is far away, but we have to remember who put us here. Yes. It’s the man posing as our President.

We have to vote against him with whoever will end his reign.

I’m not for or against the Republican Party, but I am against this individual — who has, nearly single handily, worked to destroy our country’s values as a fair and open society, with respect and true consideration for all living beings.

I want to see our country as progressive leaders again.

* at “stake” : a risky action where things of value can be gained or lost.

* Fascists- Fascism (/ˈfæʃɪzəm/) “is a form of far-right, authoritarian ultranationalism characterized by dictatorial power, forcible suppression of opposition, as well as strong regimentation of society and of the economy.”

2 thoughts on “Our Entire Country is at Stake”

Materials from this blog (photos and written, excerpts and links) may be used, provided that full and clear credit is given to "Jane A Weiss, LCSW" and "Counseling TidBits" with appropriate and specific direction to the original content. Thank you!
Loading Comments...
%d bloggers like this: