It’s a Matter of Timing

Worth reading from off the web 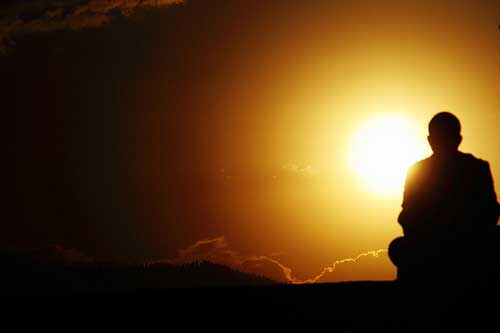 Many years ago I spent time with a Tibetan teacher, Trungpa Rinpoche. In an interview he suggested a meditation technique in which one expands one’s awareness outward. He suggested we do it together. So we sat facing each other and he said, “Just expand outward.” And I started to expand outward.

After about twenty seconds he said “Ram Dass, are you trying?” And I said, indignantly, “Yes!” He said, “Don’t try, just expand outward.” And it absolutely blew my mind. Really. That was an exquisite teaching at that moment. Don’t try, just do it. That’s really what right effort is about. I think the key to right effort is timing.I used to go to meditation courses and I hated every minute. But I thought, “It’s good for me.” And I would squirm and my legs would hurt and I’d day-dream. I’d count the hours and days until I could get out. And I felt so righteous about doing it. And then I thought to myself “Do you think this is really getting you liberated?”

I mean I’d come out so neurotic and just waiting for a steak and a milk shake. I would have fantasies during the meditation course of what I was going to eat the first day and how I’d drive in the country and how free I’d feel. But I kept going to these courses because I was feeling it was “good for me”. I felt I had to do good in order to be good. Then I decided if this was the only way to liberation, I guess I wasn’t going to make it. So I gave up.

And after a few years I noticed that I started to yearn to just sit quietly. And it was a whole different ball game. An Indian Saint, Ramama Maharshi, once said, “I didn’t eat and they said I was fasting.” Same thing!

It has to do with timing. It’s as if our minds see in advance where we’re going, and then our mind-overkill makes us imitate where we think we’re going, which doesn’t give us a chance for our intuition to get us moving in a timely manner. Somebody came up to me the other day and said, “You know, I’m just tired of being ‘should upon’.” Me too!

Mainly I was doing it to myself. You know, “You should do this, you really should.” I almost distrusted that I had a true yearning for God. And that’s where the ‘shoulds’ were coming from, that lack of faith. The more I trusted myself and said, “Well, okay, I’ll just be what I am”, the more I began to feel this deep pull towards God. And these methods which could help me, such as meditation started to be a joy rather than a mountain to be climbed. It’s just a matter of timing.