Throughout the last few years, as I’ve been contemplating what to do with my life, I’ve realized that everyone is afraid to do what they love. How do I know? Too many people work 8 hours a day, 5 days a week, doing something that they don’t love to do.

Why? I think it’s because somewhere down their paths, they were too afraid. I think a lot of it comes from being scared of failure, being embarrassed or being made fun of. People don’t go for their goals because of what people might say or think.

I’ve been down this line of thought many times, and I’ve realized that beneath it all, the one thing we ALL are, is afraid. It’s our one and only major limitation to do anything. It’s the fundamental thing that keeps us all from where we want to be, from striving to be great.

Actually, it’s only through failure that can you really achieve anything.

Find what you love to do and do it. And since you love doing it, you’ll always want to do it, and you’ll do it so well. Cause it won’t be work.

And if you’re not sure about what you want to do, just start doing something and you’ll find it.

To be made fun of:

“But what if this doesn’t work? What if I fail miserably? What if no one likes what I do and I waste years of my youth trying to do it? I’ll be a laughing stock.”

Here’s one of my all time favorite quotes: 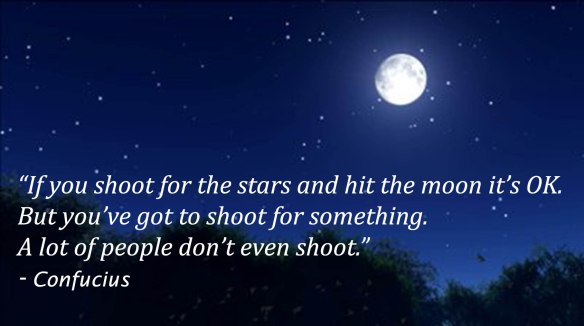 It’s one of my favorite quotes because it’s so goddamn true. So many people don’t shoot. Too many.

For what? Because you might fail? And if you do, so what? What do you really have to lose? At least if you try, you’ll know what you’re worth. And more than likely, that is so much more than you can even imagine.

You’ve probably had your own moments of self doubt, or had other people tell you “It’s too risky,” or “Come on, be realistic.”

And for those moments of doubt, I’ll borrow some thoughts I’ve heard from Will Smith:

It was unrealistic to think you can walk in a room, flip a switch and have a light go on, but thankfully, Edison and others weren’t realistic.

It was unrealistic to think that you’re going to bend giant pieces of metal, and fly people over an ocean, in that metal, but thankfully, the Wright brothers and others, weren’t realistic.

It just seems like such a ridiculous idea for me, to embrace the notion of “it’s not gonna happen, it’s not real to think that’s going to happen”.  As soon as you think that, you just made that true.

Why would you be realistic? What’s the point of the being realistic?

Never doubt that a small, committed group of thoughtful individuals can change the world. Indeed, it is the only thing that ever has.

So do what you love. You at least owe it to yourself to try.

I think crazy is working 40 hours a week doing what you don’t love to do.

From off the web at: http://thetruthyoualwaysknew.com/2013/04/17/everyone-is-afraid-to-do-what-they-love/

6 thoughts on “Everyone Is Afraid To Do What They Love”